The following is a Press Release from the American Numismatic Association, announcing that the Association’s board of Governors has approved a $5.17 Million budget for its next financial year. The ANA’s financial year 2020-2021 begins on November 1, 2020. The Governors held their meeting on September 29th virtually with the new budget reflecting a nearly 10% decrease in budget from FY 2019-2020. The vote on the budget by the Governors was unanimous.

“We devoted more time to this budget than in any year I can remember,” said ANA President Steve Ellsworth. “It was a combined effort of the Finance Committee, headed by volunteer Treasurer Larry Baber; newly hired Chief Financial Officer Brent Howe; and the ANA staff and Board.”

One of President Ellsworth’s primary objectives was that the Board thoroughly understand the budget. Staff was asked to prepare their budgets earlier this year to give the Board sufficient time to acquaint themselves with the Association’s finances, allowing for clarifying questions.

According to CFO Howe, revenues in 2020-21 include recognition of $900,000 in unrealized gains on investments. “The gain on ANA investments will be realized throughout the fiscal year,” he noted. “The recognized revenue will be used to help offset the expenses of fulfilling the mission of the ANA.”

“The budget is a living, flexible document,” said Treasurer Baber. “What we do drives the budget; the budget doesn’t drive what we do.”

Executive Director Kiick made repeated reductions to the 2019-20 budget as it became clear that the pandemic and forced cancellation of ANA events, such as its acclaimed Summer Seminar and World’s Fair of Money, were taking a toll on the organization’s finances. In all, the Association cut $574,379 from its 2019-20 operating budget and nearly a third of its staff.

In a separate motion, the Board voted 5-3 (with one absent) to authorize utilization of funds from the Ben E. Keith holdings to provide operational and program support through Fiscal Year 2020-21.

Treasurer Baber noted that the ANA is in an enviable position because of its reserves. “The ANA is extremely fortunate to have received Kenneth Keith’s bequest in 1977 of Ben E. Keith corporate stock to support the Association’s mission and programs. The value of the stock the ANA holds has grown from under $5 million in 2006 to $25 million in 2019, with additional stock, currently held in trust for the ANA, to be received in the future,” he said.

According to Baber, the details of Kenneth Keith’s bequest is a fascinating and little-known slice of ANA history that continues to shape the trajectory of the Association.

Kenneth Keith of Jolly and Wichita Falls, Texas, was the nephew of Ben E. Keith and an heir to the food-and-beverage company bearing his uncle’s name. He also was an avid numismatist. In July 1975, five men broke into Kenneth Keith’s home, which he shared with his brother Jim, in search of a valuable coin collection that, unbeknownst to the burglars, had been donated to the American Numismatic Association’s Money Museum in 1971. Jim was killed during the armed robbery, while Kenneth was beaten and bound. The ANA posted a reward for the capture and conviction of the men, who were later apprehended and convicted of murder. In 1976 Kenneth Keith set up his will naming the ANA one of the remainder beneficiaries to his shares of stock in the Ben E. Keith Company, a closely held business that is a leading food-and-beverage distributor, serving customers across dozen-plus U.S. states. Kenneth Keith died the following year.

The Ben E. Keith Company, one of the largest Anheuser-Busch InBev distributors in the nation, is listed by Forbes as the 121st largest privately held company in the United States.

A copy of the approved budget is available online at www.money.org/financial-reports.

The American Numismatic Association is a congressionally chartered nonprofit educational organization dedicated to encouraging people to study and collect coins and related items. The ANA helps its 28,000-plus members and the public discover and explore the world of money through its vast array of educational and outreach programs, to include its museum, publications, conventions and webinars. For more information, call 719-632-2646 or visit www.money.org. 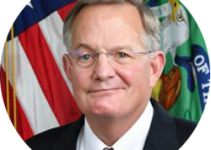