As of July 1, all mint state coins, tokens and medals, U.S. and world, that meet the PCGS Prooflike standards now are eligible for PL designation.

PCGS defines Prooflike when on a coin’s surface there is a clear reflection in the fields on both sides as viewed from two to four inches away. A cloudy effect or striations may impede the reflectivity. The company originally set the designation for Morgan Dollars when they began back in 1986. Since then, other coins have been added to the list of eligible coins for the Prooflike (PL) designation. 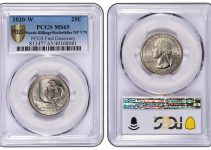