As previously reported, the Delaware American Innovation Dollar Reverse Proof coin is set to go on sale later today. Sales will begin on the United State Mint’s site at Noon Eastern, 9:00 AM Pacific. The coin will come in a special four-panel holder along with a Certificate of Authenticity from the Mint.

The Reverse Proof is priced at $9.95 with a household limit of 5 pieces and a total production of just 75,000. With that low of a production number, these special coins will likely sell out very fast. If you are interested in picking one up, it is recommended that you use the “Remind Me” feature on the Mint’s site to get an email or text message to let you know they are available.

The United States Mint is proud to celebrate innovation and honor the spirit of America with the 2019 American Innovation $1 Reverse Proof Coin from the State of Delaware— the first of four to be released in 2019. It features Annie Jump Cannon, a Delaware-born internationally recognized astronomer who invented a system for classifying stars still in use today.

Although there was a 2018 Innovation Dollar released last year (and a reverse proof this year of that coin), the Delaware coin marks the true beginning of the series which will have a total of 57 coins in it. Production of these coins will continue through 2032. You can learn the history about the series in this Coin History article. 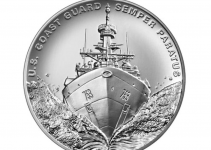