The United States Mint has released its final production report for 2019. The report shows that for the year, it produced 11.9 billion circulating coins. This is far less than the 13.125 billion coins it produced in 2018. Percentage wise, it is a drop of 11.94% year-over-year.

Getting into the specifics, a total of 336.4 million Lincoln Cents were produced in December, 145.6 million of them in Denver with the remaining 190.8 million pressed in Philadelphia. For the year, a whopping 7.04 billion cents were produced by the mint, easily taking the largest percentage of production for the entire year.

A mere 99.774 million Jefferson Nickel coinage was produced in December 2019, with the bulk of that production happening in Philadelphia. 70.294 million of them minted there while just 29.48 million were made in Denver. Overall for the year, 1.094 billion Nickel coins were produced.

Moving on to the Roosevelt Dime, 219 million of them were produced in December with the Philadelphia Mint also dominating minting as it did with the Nickel. In Philly, 182.5 million of the 219 million were pressed with the remaining 36.5 million done in Denver. For the year, 2.149 billion Dimes were made.

As has been the case since the first quarter of 2019, there were no Kennedy Half Dollars, Native American Dollars, or Presidential Dollars produced in December.

Now that the calendar has flipped to 2020, you can expect to see some big production numbers when the January production report comes out in February. Traditionally, the first quarter of every year we see large production numbers as the Mint gets this year’s minted coins out into circulation. 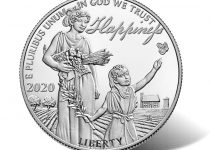