The following Press Release comes from the American Numismatic Society on the acquisition of the Robert Martin notebooks on Connecticut coppers. It was through a gift from Syd Martin, Roger Siboni, and Tony Terranova.

Through the generosity of Syd Martin, Roger Siboni, and Tony Terranova, the ANS library has acquired the Robert Martin notebooks on Connecticut coppers. These recently appeared in the Stack’s November 2019 Baltimore sale (lot 5056), and are there described in part “These eight binders represent Robert’s life’s work—nearly five decades of research on the Connecticut copper series. Robert would copy, cut and paste onto sturdy 8.5”x11” 3-hole punched pages auction appearances, fixed price listings, reports from fellow collectors, images, emails, articles, photocopies from the Hall manuscripts and just about any information he could find about Connecticut coppers—die marriages, history, and technical details.” The value of this material is self-evident, and anyone collecting or researching Connecticut coppers will find much of interest. These eight binders have been digitized at ANS and are now available on Newman Portal.

A lifelong Bronx resident, ANS Fellow Robert Michael Martin was born in 1946. He collected various coins as a child, but he began to specialize in large cents after serving a 13-month tour of duty during the Vietnam War. He was one of the first members of Early American Coppers club, which was formed around that same time. During the 1970s, Martin shifted his area of interest to colonial coins, particularly Connecticut coppers, but also had an avid interest in the coins of New Jersey, Vermont, and Massachusetts. In a marked departure from the traditional approach of most collectors, Martin began to favor color and surface quality over considerations such as quantity of die varieties. He was also a bibliophile, amassing a large numismatic library, and many of his fellow collectors remember him as a great mentor, particularly in the area of Connecticut coppers. 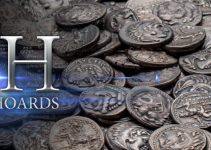