The following is a Press Release from the American Numismatic Society regarding the fundraising campaign launched to support the digital resource, Online Coins of the Roman Empire, or OCRE. The fundraising project, powered via gofundme, will go towards the efforts of maintaining and updating the OCRE database. The resource incorporates over 43,000 types of coins and more than 130,000 physical coins from more than 40 major public and private collections globally.

Clinton, the editor of USCoinNews.com, is an ANS Member.

The American Numismatic Society aims to incorporate major new research on Roman Imperial Coinage into its hugely popular digital resource Online Coins of the Roman Empire. This is a laborious process that entails updating or amending thousands of entries, and it will take several months to complete. In order to assist this project, the ANS has launched a gofundme campaign on its charity platform.

Since its inception in 2013, Online Coins of the Roman Empire (OCRE) has provided the numismatic community with a revolutionary tool designed to help in the identification, cataloging, and research of the rich and varied coinage of the Roman Empire. OCRE provides an easy to use digital resource incorporates over 43,000 types of coins and more than 130,000 physical coins, representing more than 40 major public and private collections from all over the world. The project records every published type of Roman Imperial Coinage from Augustus, in 31 BCE, until the death of Zeno, in 491 CE.

In January 2019, Spink & Son published Roman Imperial Coinage, Vol. II, Part 3, written by longtime British Museum curator Richard Abdy, with a section on medallions by P. F. Mittag. This was the first new volume in the series in 25 years, and it represents a major achievement in the field. For the ANS, this important new work, which covers the reign of Hadrian (117–138 CE), necessitates the hiring of temporary staff to aid in the replacement of some 4,000 OCRE records. The Society, in cooperation with Sprink & Sons and Richard Abdy, is now working on this process, which will take several months. The ANS is therefore asking for small donations to help integrate this very significant improvement into the online project. If you use OCRE for teaching or research, please consider donating to the ANS. No amount is too small. 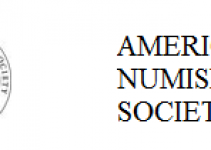