Below is an email sent to USCoinNews.com and other press sites from the United States Mint. It outlines a special Privy Mark that will be placed on the Obverse (Heads) of at least two of the 2020 America the Beautiful Quarter series. Special 2020-W Washington Quarters will be produced both for the National Park of American Samoa (American Samoa) and the Weir Farm National Historic Site (Connecticut) that have been released in 2020.

The period from May 8 to September 2, 2020, marks the 75th anniversary of the conclusion of World War II. In recognition of this significant anniversary, the Mint will manufacture “W” mint mark quarters that feature a special privy mark signifying the allied victory in World War II.

Mint marks identify the coins struck at each of the United States Mint facilities. The most commonly recognized mint marks are a “P” which denotes coins made in Philadelphia and “D” for coins made in Denver. While circulating coins are typically made only in Philadelphia or Denver, these special circulating coins that bear the “W” mint mark are manufactured at the Mint facility at West Point.

The Mint will be releasing the first two 2020 “W” America the Beautiful Quarters, honoring the National Park of American Samoa (American Samoa) and the Weir Farm National Historic Site (Connecticut), on April 6.  The coins will likely begin to appear in circulation within four to six weeks after the release date. The first wave of National Park of American Samoa quarters bearing the “P” or “D” mint mark were released February 3, 2020, and do not bear the privy mark.

Two million each the first two 2020 “W” America the Beautiful Quarters will be placed into circulation mixed among “P” and “D” mint mark quarters, with one million of each sent into circulation from the Mint facilities at Philadelphia and Denver. No “W” quarters will be mixed into bulk bags that are sold to coin dealers under the Mint’s bulk purchase program.

Privy marks are historically used on coins to reflect a unique aspect of their production or design. The special privy mark “V75” will appear on the coins’ obverse to symbolize the 75th anniversary of the allied victory of World War II. The Mint is proud to recognize the unity and determination of those who contributed to the war effort on the home front and to honor the more than 16 million Americans who served in the Armed Forces during the course of this struggle, more than 405,000 of whom made the ultimate sacrifice to the cause of democracy and peace.

The privy mark’s outline represents the aerial view shape of the Rainbow Pool located at the West Potomac Park in Washington, DC, that is now an integral part of the World War II Memorial, prompting somber reflection, appreciation, reverence, and hope for the thousands who visit each year. The “V75” privy mark was developed by Mint sculptor-engravers.

In a city of many monuments, the WWII Memorial stands out as one of the most recognized and visited in the city, drawing veterans and visitors to remember the sacrifice and heroism demanded in the conflict that altered world history.  We believe the “V75” privy mark’s particular placement, adjacent to the portrait of our revered first President, is an indelible symbol and enduring reminder to all generations of the bravery of ordinary citizens who must go to war to ensure their freedom. We at the Mint are proud to present the “W” quarter and “V75” privy mark in this important anniversary year.

Additional information about the other “W” mint mark America the Beautiful quarters scheduled for release in 2020 is contingent on Mint manufacturing capacity and schedule. 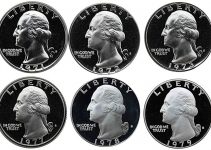