The following is a press release from PCGS announcing the addition of three senior collectibles experts to the staff as well as the promotion of two senior members of staff.

In his post as the first Collectors Universe Vice President of Customer Experience, Steinberger benefits both PCGS and its sister company PSA (www.PSACard.com) in a multifaceted role sporting a host of responsibilities and goals that aim to continually improve communication, expedite turnaround times, and ensure customer satisfaction. He brings a unique blend of experience, with decades serving as a top-performing business executive and many years as a collector and customer of PSA.

“Collecting is in my blood,” Steinberger says. “My father was an avid stamp collector. I’ve collected cards my whole life and have been a loyal PSA customer for 20 years. My daughter loves coin collecting, and I often catch her on the PCGS site researching and looking up prices,” he remarks. “It’s as if I’m working in the family business!” Business is Steinberger’s purview, having built his career on leadership roles in marketing, advertising, research, and general management.

His experience in customer care and brand health will prove pivotal as PCGS, PSA, and their parent company Collectors Universe seek effective new strategies for opening lines of communication with customers while expanding overall brand awareness. “PCGS is committed to understanding the needs of its customers and delivering a better experience for collectors,” he adds. “An investment is being made in the customer experience. I’m eager to help usher in an era of heightened customer care, proactive communication, seeking and acting on customer feedback, and providing greater transparency to the industry.”

Gandhi’s ties to the numismatic community are strong. He began collecting coins in his youth and in 2010 became a full-time independent coin dealer. Holding a marketing degree from Penn State University, he served as a cataloguer for Heritage Auctions, Stack’s Bowers Galleries, and World Numismatics, LLC, before assuming the role as PCGS Senior World Content Manager. His responsibilities include the creation and development of the PCGS World Set Registry and contributing his vast proficiency in world coinage as a staff numismatist.

He owes his extensive knowledge on coins to his diverse collecting experiences and the many numismatic confidantes that helped him carve his career path. “My dad ordered products from the United States Mint when I was a kid,” he recalls. “That was my first connection to coins. I would get to see what he bought – it was exciting to see Proof Sets and American Eagle issues.” His background in world coins was cultivated more than 10 years ago. “I’ve had exceptional mentors within the industry. Many dealers have shared their knowledge and experiences with me, which will help me with my role immensely.”

Williams has been professionally involved in banknotes for more than a decade. Kicking off his numismatic career as a banknote grader for PCGS Currency, he worked for many years as a research specialist at the National Currency Foundation, a New York-based 501(C)3 charitable organization whose mission is to educate the public on the world of paper notes from the United States and around the globe.

“I’ve collected banknotes for quite a while now, and I think you have to be pretty passionate about a hobby to make a career of it,” Williams asserts. In his new role as PCGS Senior Banknote Grader, he will verify grading on banknotes. “I’m excited! There isn’t much I haven’t handled or seen as far as United States material, but the world is endless.”

“We are so excited to bring these outstanding professionals onboard,” says PCGS President Brett Charville. “Each represents a wealth of knowledge in their respective areas, and their presence on our expanding team of numismatic experts and collectibles professionals ensures that PCGS remains the premier third-party coin and banknote grading service.”

Along with a slew of new hires, PCGS would like to additionally recognize two long-time team members who have recently been promoted. Jack Fitch has an eclectic mix of numismatic and design experience, making him an incalculable asset in the visual and aesthetic creation of projects that speak to our broad numismatic audience and growing customer base. Fitch has been elevated to Director of Product Design and will innovate the look and feel of many products, including encapsulation labels, special products, and promotional materials.

Stephanie Sabin is a 15-year PCGS veteran who has worn nearly every operational hat imaginable, including working directly on the original launch and setup of the PCGS Europe office in Paris and PCGS Asia offices in Shanghai and Hong Kong nearly a decade ago. Sabin, in addition to serving as PCGS Chief of Staff, has been promoted to Senior Director of International Operations to help expand the company with her unmatched breadth of operational knowledge and expertise across all segments of PCGS business.

Professional Coin Grading Service (PCGS) is the premier third-party coin and banknote grading company that was launched in 1986. Over nearly 35 years, PCGS has examined and certified some 44.2 million U.S. and world coins, banknotes, medals, and tokens with a combined value of more than $40.2 billion. For more information about PCGS products and services, including how to submit your coins for authentication and grading, please visit www.PCGS.com or call PCGS Customer Service at (800) 447-8848. 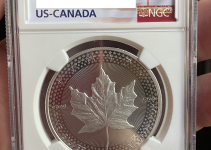 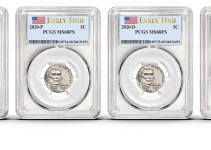