The Numismatic Crime Information Center (NCIC) over the weekend reported three separate missing or stolen packages containing coins. Two of the three packages contained PCGS graded coins while the third had a raw coin apparently stolen after the parcel arrived having been ripped open.

The first parcel was carried by FedEx and was shipped from Australia to New York and has been reported missing or stolen. It contained a1937 Australia Crown PCGS PR66 Ex-Fenton Collection PCGS #35556796. The is the finest know specimen of this particular coin.

The second package was shipped via USPS from Virginia Beach to Lawton, Michigan and has also been reported missing or stolen. The package contained 1877-S Trade Dollar PCGS MS65 PCGS #34165012

Finally, the third parcel was also shipped via USPS from Weston, Massachusetts to Sarasota, Florida. When the package arrived, it had been opened and a coin had been removed. The coin removed was a 1796 Drape Bust Large Cent.

With two of the coins PCGS graded, it should help in finding them should they pop up online or in a local coin shop or pawn shop for sale. Dealers and collectors are encouraged to keep an eye out for these coins and contact NCIC if you see them.

If you have any information on these coins or packages, you can contact Doug Davis at 817-723-7231 or Doug@numismaticcrimes.org with details.

The Numismatic Crime Information Center is a 501(c)(3) non-profit corporation whose mission is to serve as a national and international resource for collectors, dealers and law enforcement in the education, prevention and investigation of crimes involving coins, paper money, tokens, medals and related numismatic items. 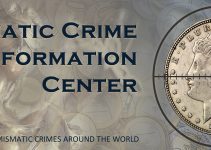