The United States Mint will open sales of the Marsh-Billings-Rockefeller 5-Ounce silver coin as part of the America the Beautiful Quarter series later today. The bullion silver coin is set to go on sale at Noon Eastern, 9:00 AM Pacific. The coin is priced at $229, a substantial increase over previous 5-ounce coins due to the high price of silver. 13,750 of the coins will be produced by the Mint and there is no household limit on the number that can be purchased once sales start.

The Marsh-Billings-Rockefeller 5-ounce silver coin is identical to the design of the America the Beautiful Quarter that was released back in September. The only difference beyond the size is the 5-ounce coin has a smooth edge versus the reeded edge of the Quarter itself.

The five ounce bullion coins for each America the Beautiful Quarter release has generally been popular amongst collectors as well as investors. The coins arrive in a black box from the Mint and includes as certificate of authenticity with it. Grading services such as NGC and PCGS offer grading services for these coins too for collectors.

The release of this 5-ounce bullion coin is the penultimate release in the series for 2020. In early December, the Mint will release the same coin for the Tallgrass Prairie National Preserve America the Beautiful Quarter. 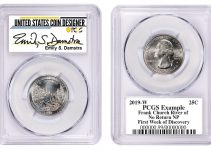