The United Stats Mint will open sales for the 2020 Kennedy Half Dollar next week on May 11, 2021. Sales will begin at Noon Eastern, 9:00 AM Pacific. The Half Dollar will be sold in 200-coin bags from the Denver and Philadelphia Mints as well as a 2-roll set from both Mints, the same combination of products for the Half Dollar the past several years.

As many readers will know, the Kennedy Half Dollar is not released into general circulation but rather made in smaller numbers for collectors and Numismatic products from the Mint. This practice began in 2002 and the 2021 Kennedy Half Dollar will be no exception.

The Mint will make available two products next week. First will be a 200-coin bag for $147.00. That will contain 100 2021-P Kennedy Half Dollars and 100 2021-D Half Dollars. Second will be a two roll set of the coins. Those rolls will contain 40 coins in each roll, one from the Philadelphia Mint and the other from Denver. Those rolls will be priced at $34.50. For those with a keen eye, you’ll note that the prices for the 2021 Kennedy Half Dollar products are the same as last year.

Given that the Kennedy Half Dollar is considered a circulation coin, there are no production limits on either the bags or the rolls. Further, when you go to the Mint’s site to purchase them, you will find that there is no household limit on the number that you can purchase.

Finally, both products are eligible for the Mint’s Enrollment Program. You can sign up for either the bag or rolls program by following the links above and joining. The Enrollment Program assures you will get the products each year and there is no shipping costs. 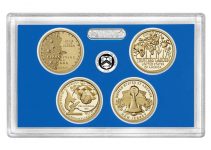