Today’s Mail Bag question comes in from Matt and it concerns the American Eagle. Specifically, Matt is curious if the new Reverse designs of the American Eagle coins will revitalize interest in the series. In my opinion, I think it will cause a bump in interest but I’m not sure it will be sustained.

I wanted to get your opinion on if you think the new design of the (American) Eagles will improve sales and revitalize interest in the series. I love these coins but I talk to some people who don’t collect them any more because they are boring.

Matt, I will start by saying that I think a lot of our current coinage is boring. I personally believe that the circulating coinage of the United States needs a major facelift. We’ve been carrying around the Lincoln Cent for 112 years and while it has had a few variations on its Reverse design, it still is the same ‘ole. I would go further to suggest that if the goal was to revitalize interest in the American Eagle, both an Obverse and Reverse change should have happened this year. While I think the new Reverse designs are stunningly beautiful, why not go big and change both sides? And while we are at it… the Lincoln Cent, Roosevelt Dime, and Washington Quarter. They all need Obverse changes.

I think this year Matt there will be a bump in sales as the new series will revitalize some people. Collectors who may have stepped away from the series because they were boring will jump back in and will pick up the new designs. And that may continue on for 2022 and 2023. But I think at that point, the quite literal shiny new object will lose its luster and folks will step away again.

I would also point out though that demand for the American Eagle remains strong overall. Even if you take out the bullion rush we saw from mid-2020 through to now, The United States Mint has continued to show strong sales for the coin in all varieties – Uncirculated, Proof, and Bullion. The Mint sold 30 million silver Eagles last year alone and is on pace to do that again this year. Even if you look back to 2019, 22 million of them were sold.

My point here is that demand has remained strong for these coins even though they have not changed in the past 35 years. I suspect we will see some rise in interest in collecting them again but I don’t necessarily think it will be a big bump or a sustained one. For those of us who do collector the American Eagle, we will continue to do so, just as those who collect Lincoln Cents or Roosevelt Dimes will continue to do so.

Keep collecting Matt and enjoy the new Type-2’s in your collection! 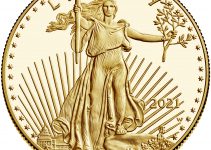