Historic sunken treasure is finally back in The Big Easy after a 167-year journey from the California Gold Rush, an arduous railroad trip across Panama, and being submerged more than 7,000 feet underwater when the S.S. Central America sank in 1857

(New Orleans, Louisiana) June 1, 2021 — A unique, sunken treasure gold coin that made its way from New Orleans to the California Gold Rush and then to the Panama railroad before going down with a famous ship has now come home to The Big Easy for the public to see.

It left the United States Mint branch in New Orleans 167 years ago, and for 157 of those years, it was submerged on the floor of the Atlanta Ocean as part of America’s greatest lost treasure.

“This historic coin is an 1854 Liberty Head Quarter Eagle struck at the New Orleans Mint and was later counterstamped by California merchant J.L. Polhemus. It was among the sunken treasure recovered in 2014 from the fabled “Ship of Gold,” the S.S. Central America, that sank in a hurricane in 1857 while sailing to New York,” explained Bruce Smith, Director of Numismatics at M.S. Rau Fine Art, Antiques and Jewels.

“It is the only gold coin of this denomination known with the advertising counterstamp mark of Polhemus, a Gold Rush-era pharmacist in Sacramento, California. He made so-called store cards with various other coins in circulation at the time. When this particular gold coin was made in 1854 its face value was $2.50. Today, it’s a New Orleans treasure and insured for $65,000 for its first visit home in over a century and a half,” said Smith.

Scientist Bob Evans, who was on the successful S.S. Central America recovery missions, told PCGS Rare Coin Market Report Price Guide Magazine, the counterstamped 1854-O Quarter Eagle he discovered while examining treasure retrieved in 2014, is one of his favorite coins.

“That coin was made in New Orleans at a time when the New Orleans Mint may well have been using California gold to mint coins. Gold Rush gold got around back then! So, then this coin made its way all the way to Sacramento, where a shopkeeper hammered his name on it. And then, somehow, it made it on to the S.S. Central America, and then, somehow, we brought it back up 150 years later, a couple of hundred miles from North Carolina. That’s just a great story! An example of a great, full-circle journey,” Evans stated.

The S.S. Central America was a 280-foot long, three-masted side-wheel steamship carrying tons of California gold when she sank on September 12, 1857, hurricane during the cargo’s final leg of the voyage from Aspinwall (now Colón), Panama to New York City. The tragedy took the lives of 420 of the ship’s 578 passengers and crew members and the loss of the gold cargo was a major factor in the economically devastating financial panic of 1857 in the United States.

When the S.S. Central America site was discovered in 1988 on the seafloor of the Atlantic, 7,200 feet down about 150 miles off the North Carolina coast, Life magazine proclaimed it “America’s greatest treasure.” 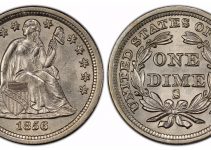 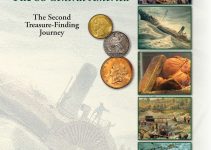 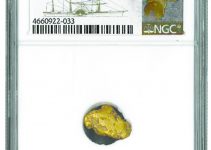