Following up from this morning’s Coin History article, Today’s Deal is aimed at helping you get your Susan B Anthony Dollar collection started. Right now on Amazon you can pick up the three-coin set from 1981 of the SBA for $11.99. The three coins are the 1981-P, 1981-D, and 1981-S and they are all being sold in their original US Mint cello packets.

The $11.99 price is a great deal. The book value on each of these coins ranged from $10-20 depending on which mint is comes from, with the San Francisco mintmark being the most valuable.

Remember that in 1981, only 9,742,000 Susan B Anthony Dollars were struck, a stunningly low number for any modern coin.

As for this particular Today’s Deal, if you are an Amazon Prime customer you get free two-day shipping including. For everyone, you have a satisfaction guarantee on the purchase from Amazon so you can buy with confidence.

One of the most polarizing and short lived coins in our currency history was the Susan B Anthony Dollar. Plagued by unpopularity because of its size and a lackluster design, the SBA was almost doomed from the start.

Discussions of a new dollar coin began in 1976 with both vending machine companies and the public pushing back against the size of the then Dwight D. Eisenhower “Ike” Dollar coin. The Treasury Department and Congress wanted a smaller coin and began working on that design. Originally, the 26.5mm dollar was to depict Liberty as many coins in our history have done. However, Congress called on the Treasury to put a real woman on the coin, a first for our coinage. Several proposals of who that should be were submitted with social reformer Susan B Anthony selected. For the reverse, the coin would have the same design as the Eisenhower dollar, an adaptation of the Apollo 11 moon landing insignia. The coin, crucially, was also to have reeded edges. The inset of the edge would have 11 sides to it but with the reeding, it was hard to feel the difference between it and a Quarter.

To get more details or to order, head to this page at Amazon. 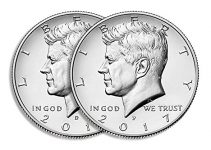 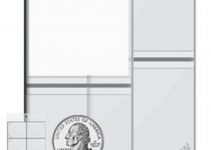