If you haven’t picked up your 2020 edition of A Guide Book of United States Coins, a.k.a the Red Book, now’s your chance. Right now on Amazon you can pick up the 73rd Edition of the book for $13.27 on Amazon. That’s about $6 less than the retail price for the book.

I purposely choice this book as Today’s Deal with the announcement that the two main editors of the book will be interviewed next month at the World’s Fair of Money.

While in this connected world we can easily get up-to-the-minute bullion pricing and even coin pricing, there is something comforting about having a Red Book handy. If you are new to collecting, pick one of these up. You’ll quickly figure out that it isn’t just about the pricing and grading guides in the book, but the detailed history of the coins we’ve had here in the United States.

Between the Red Book and the ANA Grading Standards book, you have two of the top resources for coin collecting and coin grading in your library.

To check out Today’s Deal, head over to the product page on Amazon. 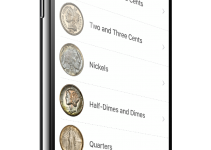