The United States Mint has opened sales for the latest Presidential Medal honoring James Monroe. The silver medal is one ounce of 99.9% pure silver and commemorates the fifth President of the United States. It is $39.95 and can be found here at the US Mint’s site.

A veteran of the Revolutionary War, James Monroe studied law under his mentor Thomas Jefferson, after resigning his commission. He went on to serve as a U.S. Senator representing Virginia, and as a Minister to France and later to Britain. He also assisted in negotiations for the Louisiana Purchase. Among his other accomplishments, history books remember James Monroe as the father of the Monroe Doctrine, the foreign policy principle that dictated the role of America and Europe in the Western Hemisphere.

As with previous medals in the series, there is no Mint production limit on them nor is there a household limit on your purchase. These medals make a great gift idea for collectors and non-collectors alike.

The Monroe medal as the third Presidential Medal released in 2019 with a final medal expected at the end of the year. 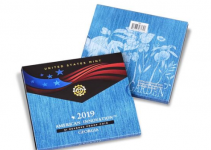