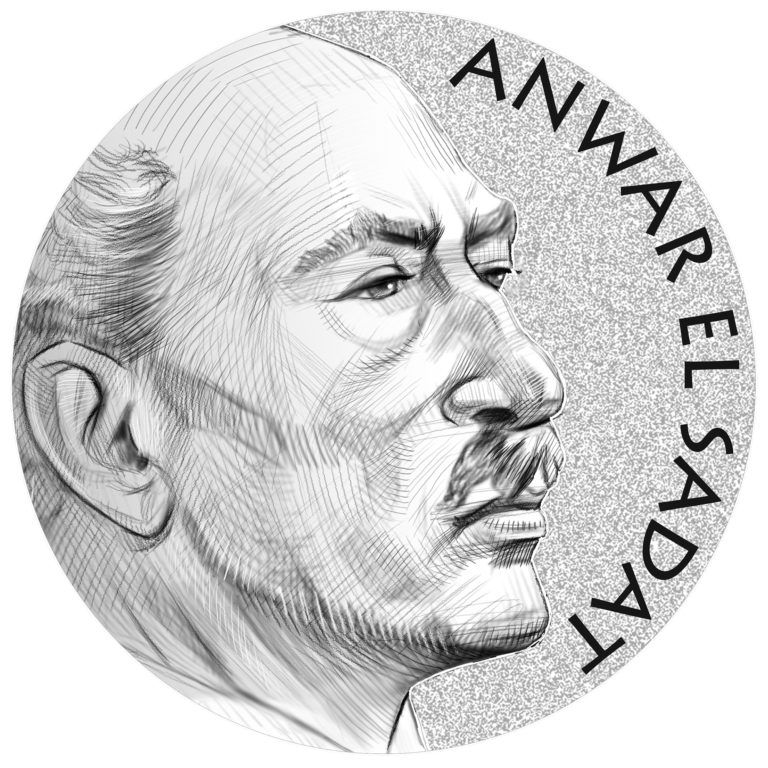 WASHINGTON – The United States Mint today unveiled the designs for the Anwar El Sadat Congressional Gold Medal in the Department of the Treasury’s historic Cash Room. United States Mint Director David J. Ryder unveiled the designs, and the ceremony was led by Assistant Secretary of the Treasury for Management David Eisner. In attendance were members of the Sadat family as well as representatives from Egypt and other nations.

“We are eternally grateful for President Sadat’s contributions towards peace in the Middle East,” said Director Ryder. “Through this medal, the United States honors a courageous man of principle, vision, and wisdom, who brought hope and unity in a world filled with conflict and divisiveness.”

Congress bestows the Congressional Gold Medal – one of the nation’s highest civilian awards – as an expression of gratitude for distinguished achievements and contributions by individuals, groups, or institutions. On December 13, 2018, Congress authorized the award in recognition of Sadat’s heroic achievements and courageous contributions to peace in the Middle East. President Sadat was the first Arab leader to visit Israel, meeting with Israeli Prime Minister, Menachem Begin, and speaking before the Israeli Knesset in Jerusalem stating, “I have come to you so that together we might build a durable peace based on justice, to avoid the shedding of one single drop of blood from an Arab or an Israeli. Any life lost in war is a human life, irrespective of its being that of an Israeli or an Arab. When the bells of peace ring, there will be no hands to beat the drums of war.”

President Sadat engaged in negotiations with Prime Minister Begin, which resulted in the Framework for Peace in the Middle East, more commonly known as the “Camp David Accords.”

Following negotiations, they signed the Egypt-Israel Peace Treaty at the White House on March 26, 1979, and Egypt became the first Arab country to officially recognize Israel. The Peace Treaty ultimately ended the state of war that had existed between Israel and Egypt since the 1948 Arab-Israeli War. In 1978, both President Sadat and Prime Minister Begin were awarded the Nobel Peace Prize.

The medal’s obverse (heads) design features a large, dramatic portrait of Anwar El Sadat. The composition is designed for the portrait to be sculpted in the manner of ancient Egyptian relief, with the figure inset into the surface of the medal and its features sculpted flush with the medal’s surface. The inscription “ANWAR EL SADAT” is incused along the right border. The reverse (tails) design depicts the Unknown Soldier Memorial and Anwar El Sadat’s Tomb with the inscriptions “HE LIVED FOR PEACE AND DIED FOR PRINCIPLES,” “ANWAR EL SADAT 1918-1981,” and “ACT OF CONGRESS 2018.”

About the United States Mint
The United States Mint was created by Congress in 1792 and became part of the Department of the Treasury in 1873. It is the Nation’s sole manufacturer of legal tender coinage and is responsible for producing circulating coinage for the Nation to conduct its trade and commerce. The Mint also produces numismatic products, including proof, uncirculated, and commemorative coins; Congressional Gold Medals; and silver, gold, and platinum bullion coins. Its numismatic programs are self-sustaining and operate at no cost to taxpayers.