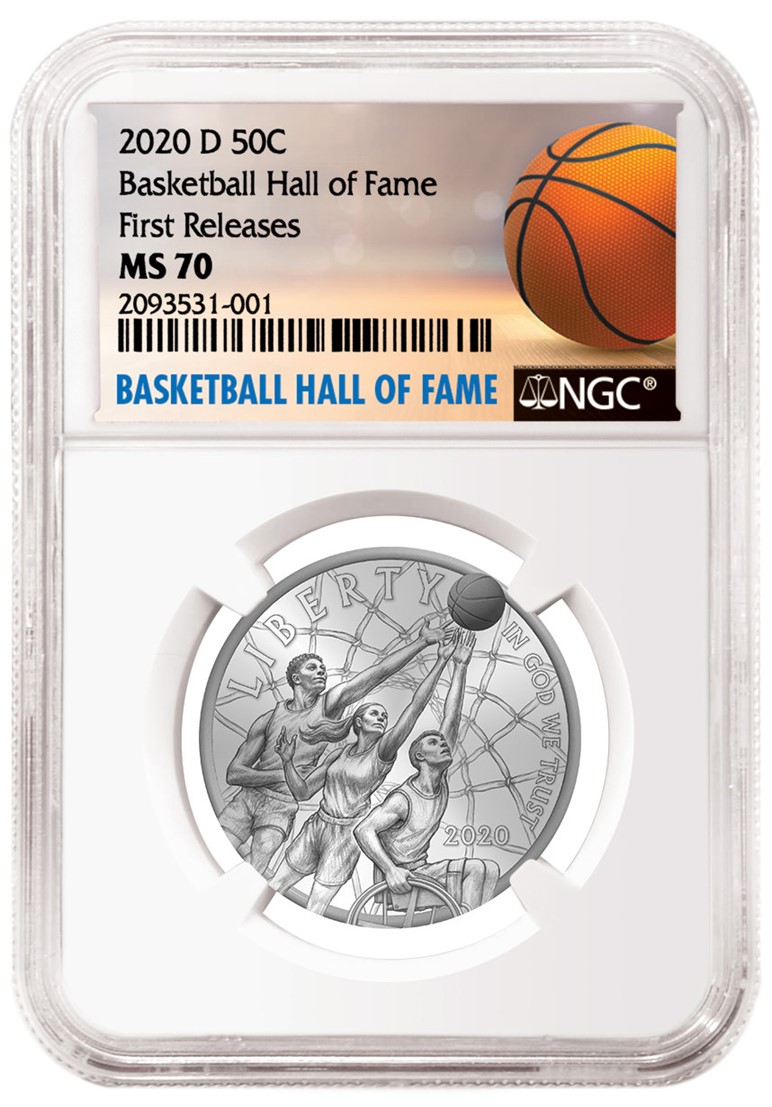 The following Press Release comes from Numismatic Guaranty Corporation, or NGC, on the availability of special label inserts for the upcoming 2020 Basketball Hall of Fame commemorative coins. This comes after the grading company announced an exclusive signature label with the commemoratives Reverse designer Donna Weaver.

Numismatic Guaranty Corporation® (NGC®) is celebrating the April 4 release of the 2020 Basketball Hall of Fame Commemorative Coins with a vibrant special label offered for free to all submitters.

Other than Olympic coins and a few coins recognizing individual players, the US Mint has struck only one other coin commemorating a Big Three American pastime — the 2014 Baseball Hall of Fame Commemorative Coin, which proved to be one of the Mint’s most popular releases in recent years. The mintage of 50,000 gold and 400,000 silver coins quickly sold out.

Like the baseball coins, the 2020 Basketball Hall of Fame Commemorative Coins will be dome-shaped, reminiscent of the shape of a basketball. The only other curved coins that the US Mint has produced were the 2019 Apollo 11 50th Anniversary Commemorative Coins, another hugely successful release.

The design for the common obverse of the coin was selected in a national contest. The winning design conveys the inclusive nature of basketball, a game that is played and loved by people the world over. For the common reverse, the Mint chose US numismatic artist Donna Weaver to execute the design. Her elegant depiction of a ball passing through the net was immediately praised for perfectly capturing the essence of the game.

To ensure the fastest availability to collectors and fans, basketball coins encapsulated with NGC’s Donna Weaver and James P. Naismith Authentic Hand-Signed Labels will be available exclusively from select retailers immediately after the coins’ release.

Adding to the excitement, a portion of the half dollar and silver dollar basketball coins will be the first colorized coins ever offered by the US Mint. To recognize this historic innovation in US coinage, NGC will give these coins a special attribution. The colorized coins will be released after the rest of the coins go on sale April 4.

The following designations are available for the 2020 Basketball Hall of Fame Commemorative Coins:

The following labels are available for the 2020 Basketball Hall of Fame Commemorative Coins: