The United Stats Mint will open sales for the 2020 Kennedy Half Dollar on Monday, June 1, 2020. Sales will begin promptly at Noon Eastern, 9:00 AM Pacific. The Half Dollar will be sold in 200-coin bags from the Denver and Philadelphia Mints as well as a 2-roll set from both Mints.

As many readers will know, the Kennedy Half Dollar is not released into general circulation but rather made in smaller numbers for collectors and Numismatic products from the Mint. This practice began in 2002 and the 2020 Kennedy Half Dollar will be no exception.

There are links to the products from the Mint that will be available on June 1st:

Given that the Kennedy Half Dollar is considered a circulation coin, there are no production limits on either the bags or the rolls. Further, when you go to the Mint’s site to purchase them, you will find that there is no household limit on the number that you can purchase.

While sales begin on June 1, you can go ahead and sign up for the “Remind Me” feature for both of these products. That will allow you to get a text message or email letting you know when sales have begun. 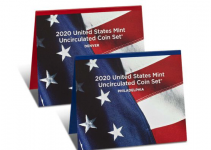