The following is a Press Release from Numismatic Guaranty Corporation, NGC, announcing special designations and labels for the upcoming Women’s Suffrage Centennial commemorative coins and medals. The commemorative is slated to go on sales next week on August 18, 2020. NGC will be offering Early Release and First Release labels as well as a special pedigree for the coin and medal set commemorating the 19th Amendment.

The coins and medal celebrate the 100th anniversary of the ratification of the 19th Amendment as well as the inspiring efforts of suffrage activists. Submissions of the coin and medal set must be received in the sealed US Mint shipping box for the coin to be eligible for the “Women’s Suffrage Coin & Medal Set” pedigree. Special submission instructions must be followed. See the “Submission Instructions” section of this article.

On August 18, the US Mint is releasing two coins and a medal that commemorate the 100th anniversary of the ratification of the 19th Amendment, which gave women the right to vote in the single largest expansion of voting rights in American history. Numismatic Guaranty Corporation® (NGC®) is celebrating the Women’s Suffrage Centennial 2020 Uncirculated Silver Dollar, Proof Silver Dollar and Proof Silver Medal by offering special designations and labels.

Coins and medals received by NGC within the first 30 days of their release are eligible for NGC’s popular Early Releases and First Releases designations and labels.

In addition, NGC will attribute coins and medals from the set with a special pedigree — Women’s Suffrage Coin & Medal Set — for no additional fee. Only 10,000 of these sets will be issued since just 10,000 Proof Silver Medals will be struck. The medal will automatically receive the set pedigree; the Proof Silver Dollar will receive the set pedigree if it is submitted to NGC in the sealed US Mint shipping box.

The obverse designs of the Uncirculated Silver Dollar and Proof Silver Dollar both feature the profiles of three women from different eras (as illustrated by their hats) who represent the tenacious, decades-long campaign that finally led to the ratification of the 19th Amendment on August 26, 1920. The reverse showcases art deco styling and the famous slogan of the suffrage movement, VOTES FOR WOMEN, on a ballot box, with the centennial year, 2020, being dropped inside.

On the obverse of the medal, several women’s hands hold up a heavy stone etched with the words: WOMEN’S SUFFRAGE CENTENNIAL. A child’s hand also reaches up, symbolizing that the fight for equality is ongoing and spans generations. The medal’s reverse displays the text of the 19th Amendment within the US flag.

Fittingly, the Women’s Suffrage Centennial coins and medal were both designed and engraved by women artists.

The following attributions and designations are available for the Women’s Suffrage Centennial coins and the coin and medal set:

The following labels are available for the Women’s Suffrage Centennial coins and the coin and medal set: 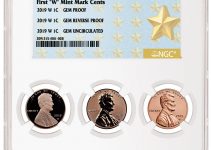