The American Numismatic Association (ANA) has released Episode 6 of their popular podcast, Two Bits. This episode is titled The Dawn of Coinage and covers the early history of coinage as a payment system.

Join Doug and Mitch as they delve into the origins of coinage of the ancient world. They discuss the challenges of the barter system, the spread of metallic standards, and the invention of coinage as we know it. Find out why it’s easier to make change for a coin than for a cow!

Episode 6 is the latest for the podcast was launched earlier this year by the American Numismatic Association and is available on all of the popular podcast apps and services. This includes Apple Podcasts, Google Podcast, Spotify, and PocketCasts to name but a few. Just search for Two Bits in your favorite app. You can also visit the link above to go to the podcast’s site and listen to episodes there too. 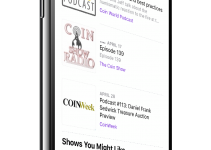