The United States Mint has released its weekly sales report for the 7-day period ending November 8, 2020. Unsurprisingly, all three of the Mint’s new products released last week were in the top ten selling products list, with two of the three taking the top two positions. Overall, the Mint sold 5,873,683 products for the week.

The top selling product for the Mint last week was the limited release 2020-W End of World War II American Eagle silver Proof. The Mint reported 74,242 of the 75,000 being sold. Realistically, all 75,000 have been sold but the Mint is reconciling things on the back end. The ASE with the privy mark to commemorate the end of World War II sold out within minutes despite significant problems with the Mint’s website at the time.

The second best selling product for the Mint last week was another new release, the 3-coin America the Beautiful set for the Tallgrass Prairie National Preserve. 11,181 of these sets were sold last week, a strong showing for what will be the last of these 3-coins sets for 2020. The set was followed closely by the 2020 Proof Set. The annual set had another 10,423 sets sold last week. That pushes the total sales for the set to over 400,000 (409.449) for 2020.

The 2020 American Innovation Dollar Proof Set continued its strong showing in its third week of availability. 3,708 of the sets were sold last week, putting its total sales at 58,645 for the year. Meanwhile, the fifth best seller was the 2020 Silver Proof Set with 3,219 sets sold. That puts the the set just shy of 300,000 for the year.

The third new product released by the Mint last week, the 2020-W End of World War II American Eagle gold Proof was the sixth best seller but fundamentally was limited by the number available. The Mint reports that 1,829 of the 1,945 available have been sold. This, however, is likely a reconciliation matter like the silver American Eagle as the gold Proof is not available on the Mint’s site.

Here then is the complete top ten selling products for the United States Mint for the week ending November 8, 2020. 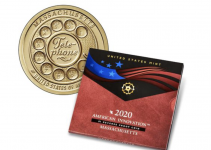