The United States Mint has released the line art of the winning design of the 2021 Christa McAuliffe Commemorative coin to the public. The coin commemoratives the Mrs. McAuliffe, the first selected educator in the Teacher in Space Program in the 1980s. She, along with six other astronauts were killed during the explosion of the Space Shuttle Challenger STS-51L mission on January 28, 1986.

The design of the coin’s Obverse and Reverse were selected out of the candidate designs released by CCAC in July of this year.

The legislation calls for the United States Mint to produce 350,000 silver Dollar coins that would feature McAuliffe on the Obverse and a Reverse that would “portray her legacy as a teacher”. The Christa McAuliffe Commemorative Coin would be produced both in Proof and Uncirculated finishes and will contain at least 90% silver. Further, a surcharge of $10 would be added to the price of each coin with the proceeds being paid to the FIRST robotics program.

The Act authorizing the coin was signed by President Trump on October 9, 2019, just eight days after the law passed in the Senate on October 1, 2019.

According to the Mint’s Production Schedule, the release date for the commemorative is currently TBD. Generally speaking, the Mint releases commemorative products in the early summer each year but that, of course, is subject to when the Mint gets around to producing them. 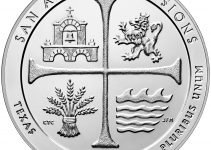