Today’s Mail Bag question comes from Bella and it is a question I suspect every collector at one time or another has debated. Is it easier to grade worn coins than it is coins that are closer to Mint state? Or is it easier grading Mint state coins over worn coins?

I suspect Bella that if you asked ten collectors this question, you would end up with five saying it is easier to grade more worn coins and five that would say it is easier grading near Mint state coins. In my view, the answer to this comes down to your individual ability to grade.

I have been grading coins in my own collection since the mid-1990s and for me, personally, grading more worn coins is much easier than grading near Mint coins. If I look at a 1917 Lincoln Cent for example, I can based on experience and using the ANA Grading Standards for United States Coins book as reference, get to the grade of that coin. In a lot of cases, because I’ve looked at hundreds of Lincoln Cents, Buffalo and Jefferson Nickels, Mercury and Roosevelt Dimes, Franklin Halves, and so on, I can generally get the grade right without looking that the grading standards book first and use it to verify what I think the grade is of the coin.

However, if you give me a 2019 Roosevelt Dime and ask me if it is a MS-67, MS-69, or MS-70, I’m toast. I struggle with these one point differences because I’ve only looked at hundreds of coins, not thousands like the professional graders at NGC and PCGS for example. And frankly, I just don’t have an eye for seeing the minute differences between a 68 coins and a 70 coins. It’s just not in my skill set!

In my opinion, the ability to grade well worn coins or new coins comes down to “mileage”. You simply have to spend the time looking at coins, studying them, and using reference sources to help you come to a grade. Yes, you will make mistakes! You will over-grade or under-grade a coin from time-to-time. It happens. Even the professional grading services have services that allow you to resubmit coins they have graded to have it graded again if you think the grade is wrong. Don’t let that be a discouragement to you. I firmly believe that every coin collector should grade their own coins as the science-meets-art of coin grading is a key trait of a collector.

So Bella, to answer your question, it really comes down to you and your skill set. You may find, over time, that it is easier for you to grade coins with more wear more accurately than those with virtually none. Or it may be that you find the knack for grading those MS-68’s out there and can easily spot the difference between it and a MS-69. Either way this falls for you, don’t be discouraged. If anything, continue to push yourself to become a better grader of all your coins. Then use references, other collector friends, and grading services to verify your grades.

Finally, if you (or other readers) don’t have the Grading Standards book, I highly recommend picking it up (Affiliate Link). I personally feel this the best grading source book out there today.

Thanks for writing in Bella.

If you have a question for the Mail Bag, use the About Page to send in your question. 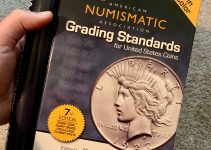