For the week, the Mint sold a total of 25,682 numismatic products.

The top two selling products on the January 24 report were the 100-coin bags of the South Carolina American Innovation Dollar. The Philadelphia Mint bags had 5,300 bags sold for the week, closely followed by the bag produced in Denver at 4,831.

The third best seller for the Mint last week was the 2020 American Innovation Dollar Proof Set. Another 2,622 of the sets were sold last week, putting its total sales at 81,782. That still puts it behind the 2019 set, which now has sales of 122,092, but its selling pace is much faster than its predecessor.

The fourth and fifth best sellers for the week of January 24 were once again American Innovation Dollar products for South Carolina. The 25-coin roll from Denver of the dollar coin saw 1,640 rolls sold for the week, followed by the Philadelphia roll of coins at 1,335.

Of interest in this week’s report is the End of World War II 75th Anniversary 24-Karat Gold Coin. Initially thought to be sold out, the Mint last week quietly put them back on sale with another 621 of the coins sold. That puts its total sales at 7,455 of the 7,500 that were available. A similar story can be found with the Mayflower 400th Anniversary Gold Reverse Proof Coin which saw 606 coins sold after it went back on sale, putting it total sales now at 4,974 of 5,000 total coins. 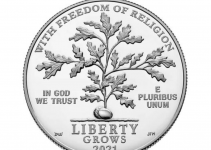