As reported last week, the Citizens Coinage Advisory Committee (CCAC) met on January 19, 2021 via audio conference to discuss the 2021 Morgan and Peace Dollars that are to be created under the 1921 Silver Dollar Coin Anniversary Act. During the meeting, candidate images of the two coins were released and now, thanks to CoinWorld, we now have more details on what the Mint plans to do on striking of these coins.

In addition, the Philadelphia facility will also strike two additional Morgan Dollars that will have privy marks to honor branch Mints that were functional during the Morgan Dollar era. That is, there will be a privy mark to honor the Carson City and New Orleans Mints. Where those privy marks will be place is not clear.

Finally, the Philadelphia Mint will strike the 2021 Peace Dollar but it will not have a Mint Mark, just as the 1921 coins were absent of one.

Morgan dollars were originally struck at the Carson City Mint between 1878 and 1893 and at the New Orleans facility between 1879 and 1904.

The Mint has not disclosed what finishes of the two new coins will be made available but it is likely a Proof and Uncirculated finish will be offered. Equally, there is clear indicator of planned mintages of the coins. 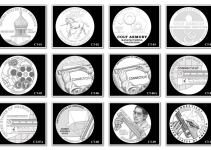