Editors Note: Starting with the February 8, 2021 report, the United States Mint Bullion and United States American Buffalo Bullion sales reports will be combined into one article.

The United States Mint has updated its daily Bullion Sales Report through to this morning, February 8, 2021. It was an extraordinary week for bullion sales with push for bullion, particularly silver, was strong over last weekend and early into the week. All told, the Mint sold 1.685 million bullion coins to their Authorized Purchaser program.

Breaking down the totals, there were 1.621 million American Eagle silver bullion coins sold last week, virtually all of those on Monday, February 2 last week. To put this into perspective, the United States Mint sold 650,000 American Eagle silver bullion coins in all of February 2020. That equals a 149.38% increase year-over-year for the month of February and we are just one week into the month.

Finally, the American Buffalo gold bullion coin saw 9,000 coins sold over the past week, representing an 800% increase over February 2020.

The Mint clearly enjoyed a strong week in bullion sales and that will likely continue this week, as it has done throughout much of 2020 and early in 2021. 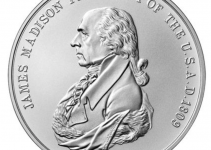