The United States Mint has released is numismatic products sales report for the seven day period ending Sunday, March 28, 2021. With no new numismatic products released last week – and none scheduled until next month – sales for the Mint were understandably light. Only a net of 12,826 items were sold once returns are factored. That said, of the top ten selling products for the Mint last week, seven of them were products that have been released in 2021.

The top selling product for the week was the 2021 Proof Set. With 5,832 sets sold, it was by far the top selling product and has now sold over 212,000 sets for the year (212,374). The set eclipsed the second best seller, the 2021 Chris McAuliffe Proof Silver Dollar, which sold 978 coins in the last week. That means that 28,100 of the coins have now been sold since its release in January. Meanwhile, the 2021 National Law Enforcement Memorial Proof Silver Dollar, which was released on the same day as the McAuliffe commemorative, was the third best seller with 388 coins sold. Since its released, just 15,661 of the coins have been sold.

Here is the complete rundown of the top ten selling products for the United States Mint last week. 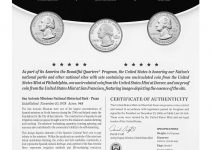