The United States Mint has released its circulating coinage production report for June 2021. The report shows that the Mint produced 1.3486 billion coins for circulation last month, down slightly from the 1.473 billion produced in May 2021. Drop in production ends a two month increase in production by the Mint on our national coinage.

As is always the case, the Mint produced more Lincoln Cents than any other circulating coins in June 2021. For the month, the Mint product 782 million Cents, 385.6 million in Denver and the remaining 396.4 million in Philadelphia. The total production was down from May when 818 million Cents were produced. For the year, the Mint has produced 3.7232 billion Lincoln Cents for circulation.

The Jefferson Nickel also saw a slight drop in production last month. In total, the Mint produced 161.2 million Five Cent pieces for the country, 78.2 million from Denver and 83 million from Philadelphia. That is down from the 167.7 million produced in May. For all of 2021, the Mint has now produced nearly one billion Nickels for circulation, with a total of 901.18 million coins. Production should surpass the billion coin threshold in the July 2021 report.

Turning to the Roosevelt Dime and Washington Quarter, production for both continued the downward production trend for the month. For the Ten Cent piece, the Mint produced 230 million in June. 124.5 Million of those Dimes were produced in Denver and 105.5 million in Philadelphia. That moved the total production of Roosevelt Dimes to 1.597 billion for 2021. Meanwhile, the Washington Quarter saw a total production of 175.4 million coins last month. The Denver Mint pressed 86.8 million 25-Cent pieces while the Philadelphia Mint made just slightly more at 88.6 million. Note that this production figure is for all Quarters regardless of their Reverse design. Remember that the Mint has produced two Reverse designs for the Quarter in 2021: The Tuskegee Airmen and the Washington Crossing the Delaware Reverses. For the year, 1.123 billion Quarters have been pressed by the Mint.

For the Kennedy Half Dollar, Native American Dollar, and Presidential Dollar, there was no production for June. 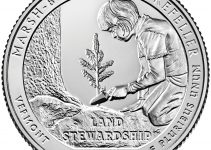