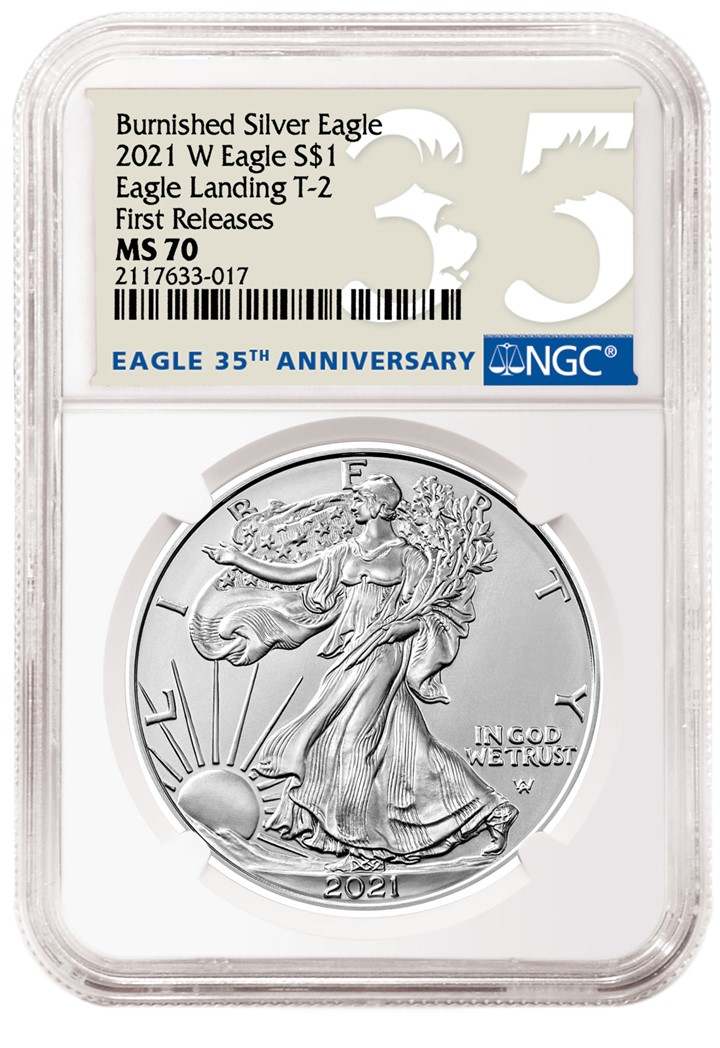 The following is a Press Release from Numismatic Guaranty Corporation (NGC) announcing it will over special labels and designations to collectors who submit their 2021-W American Eagle Silver Uncirculated (or Burnished) coin for grading. The coin went on sale last week and has already sold out according the the United States Mint.

The excitement surrounding the 35th anniversary of the American Eagle program continues with the release of the newly refreshed 2021-W Uncirculated Silver Eagle by the US Mint on September 9, 2021. Commonly referred to as the Burnished Silver Eagle, this year’s issue has a limited mintage of only 175,000.

Burnished American Silver Eagles were created as collector versions of the US Mint’s Bullion Silver Eagles. With a matte finish, these burnished coins depict the same design as the bullion coins — Adolph A. Weinman’s Walking Liberty on the obverse and an eagle on the reverse.

Through the use of modern technology, the coin now features an obverse that more closely resembles Adolph A. Weinman’s original Walking Liberty design, with the addition of his artist mark above Liberty’s heel. The coins, struck at the West Point Mint, include enhanced security features and a reeded-edge variation.

Since the coins were first released in 2006, they have featured an eagle on the reverse like their bullion counterparts. Alongside the American Eagle’s 35th Anniversary this year, the eagle image has changed from the heraldic one designed by John Mercanti to a new design — a stunning American Bald Eagle in flight — engraved by Michael Gaudioso, who signs certification labels exclusively for NGC.

The NGC Michael Gaudioso Signature Label is available for the 2021-W Silver Eagles through select retailers.

Since 1987, NGC has certified more than 13 million Silver Eagles — far exceeding any other coin grading service. With the release of the new 2021 Silver Eagles, NGC looks forward to introducing even more ways to enhance these popular coins. To learn more about NGC’s certification options for all of the 2021 American Eagles, click here.

The following designations are available for this coin:

The following labels are available for this coin: