Happy Wednesday readers! First, a word of thanks for all of you who have posted a question or comment about the site. I really appreciate you taking the time to do so and, frankly, I’ve been surprised by how many of you have so far. If you have a question or comment, head to the About page and use the comment form to leave your comments, feedback, or questions.

Normally I only post a Mail Bag question once a week but this question from John M was a legitimate question that needs explanation I think.

I saw your welcome article a few weeks back but I could have sworn that this site started sometime last year. Or am I thinking of another site? Your articles only go back to this first one on May 1

John, you are pretty close on things. Technically, US Coin News launched in August 2017 but it didn’t last very long. Like, a month. Simply put, I had two big things happen that put a quick end to it back then.

First, I simply had too much going on in my day-to-day life. I was transitioning jobs and actually spent a fair amount of time without one in 2017 and early 2018. My focus was on other things other than coins and running what at the time was a third site all on my own. It was just too much.

Second, the hosting company that I used at the time for US Coin News had a major server failure at the end of August 2017. That failure cost the site three-quarters of the content that was on it. Essentially, it was dead. I hadn’t had any backups of the site done yet and when that happened, combined with the things going on in life, I just let it die.

By-the-way, the site is now hosted by another company on a private server so backups happen multiple times a day.

It also came down to costs. Running a site that you want to have up all the time is expensive. That’s why things like Affiliate purchases from you through Amazon help – a LOT.

Fast forward to the end April of this year. I had a lot more stability from a day job and life balance perspective, I’d shuttered the two other sites I was running (they are still up, just letting them go stale), and all of my focus is now on USCoinNews.com. I spent several weeks revamping the site before it relaunched, getting code and other things sorted out for it. That’s why I am considering it a relaunch of the site. Everything is new.

Thanks for the question John! 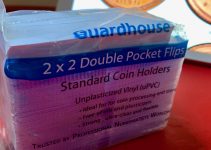