If you read the US Mint Sales Report post yesterday, I mentioned that the Pride of Two Nations two-coin set between the US Mint and the Royal Canadian Mint were nearly sold out. In all, 4,534 of the set remained after based on the sales report of the 100,000 that were available.

The set contained a 2019-W in an enhanced reverse proof finish as well as a Royal Canadian Mint 2019 Silver Maple Leaf in a modified proof finish. Both coins are .999 pure silver. It is the first joint venture between the two Mint’s and proved to be a success as it nearly sold out in the first day.

It is possible that a few sets remain so I recommend setting up the “Remind me” function on the product page for the set on the Mint page just in case some do become available. 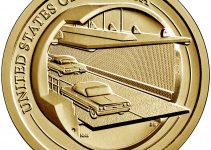