The United States Mint has released their weekly sales report. The report is dated July 14, 2019 and reports Mint sales over the previous seven days. In the report, many of the usual suspects can be found also a rebound of sorts for some others.

The rebounds mainly come in the form of the various Apollo 11 commemorative coins available from the Mint. With this week being the 50th anniversary of the first manned moon landing in July 1969. Indeed, three Apollo 11 related coins were in the top 10 sales for the week, with the silver proof commemorative finishing the week the third best seller.

The top seller for the week was one readers will be familiar with: The 2019 Proof Set. Overall, the Mint sold 3,613 units this past week, taking the overall sales total to a solid 366,656 in total. Second this week was the 2019 Silver Proof Set. 3,009 of those were sold this week by the Mint, bringing that product’s sales total up to 274,207. As mentioned, the Apollo 11 Silver Proof commemorative rounded out the top three in sales, adding 2,555 to its total sales which now sits at 176,275.

Below you will find the Top Ten list for the Mint sales report ending July 14, 2019

Undoubtedly there will be some readers who are curious how the recently released Pride of Two Nations Commemorative did this week. According to the Mint’s site, the two-coin set it still unavailable and this week’s report is likely a “true up” of sales figures overall. 158 more units were added to the sales total for the set, bringing the grand total of sales to 95,466. That leaves a total of 4,534 of the sets available. When those will be available from the Mint is not know but I highly recommend readers who are interested to use the “Remind Me” feature on the product page to be informed of when it is available again. 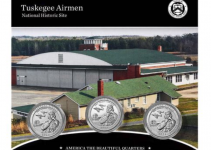