The United States Mint has announced a new special set featuring the Sacagawea (or Native American) Dollar along with a 2017 Dollar bill. The new set will be available starting July 24, 2019 at Noon Eastern, 9:00 AM Pacific.

The Dollar coin and paper set will be reasonably pried at $15.95 and will be available directly from the Mint at this link. Note that there is a production limit of 50,000 sets and there is a limit of two sets per household. The set will come in a tri-fold that allows for easy viewing both the coin and the bill.

The 2019 Native American $1 Coin reverse (tails side) design highlights the contributions of Native Americans to the U.S. Space Program. American Indians have been on the modern frontier of space flight since its infancy. American Indian contributions to the U.S. Space Program culminated in the three spacewalks of John Herrington (Chickasaw) on the International Space Station in 2002. These and other pioneering achievements date back to the work of Mary Golda Ross (Cherokee), one of the first female American Indian engineers. She helped develop the Agena spacecraft for the Gemini and Apollo Programs.

The reverse design features Mary Golda Ross writing calculations. The formula is an example Ms. Ross could have used to calculate interplanetary space travel, determine the departure plane orbit, and transfer orbit energy. Behind her, an Atlas-Agena rocket launches into space, with an equation inscribed in its cloud. An astronaut, symbolic of Native American astronauts—including Herrington—spacewalks above. In the field behind, a group of stars indicates outer space.

The $1 Series 2017 note is from one of the 12 Federal Reserve Bank locations across the U.S. and features a serial number beginning with “1959” to correspond to the launch year of the Agena spacecraft depicted on reverse of the coin.

The Mint has already enabled the “Remind Me” feature for this new set’s product page. You can either subscribe by email or by text message and be informed when it is available. 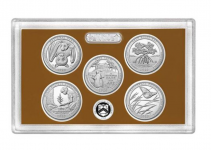