In a somewhat rare event, the United States Mint has revised the release date for the upcoming 2019-W American Eagle Palladium Reverse Proof coin. Originally, the coin was set for release on September 5th, the coming Thursday. Now the Mint has revised the schedule and indicates it will be released on Thursday, September 12, 2019.

The Mint gave no indicator as to why the delay was happening but it likely has to do with production not being completed or other components of the packaging not being ready. There will still only be 30,000 of the one-ounce bullion coins produced.

This particular series of bullion coins started in 2017 with an uncirculated version that year. It was followed in 2018 with the proof version and this year, for the first time, the Palladium coin will be offered in Reverse Proof.

The Mint has already setup the product page for this coin and you can find it here. The product code is 19EK and as mentioned, only 30,000 will be struck. When purchased, it will come in a gray leatherette presentation case with satin lining. It is accompanied by a Certificate of Authenticity.

As for price, that hasn’t been disclosed by the Mint yet but you can expect a price to be around $1400. Pricing of bullion coins are determined by the spot price of the metal in question just prior to public release.

When you visit the Mint’s site for the coin, you can sign up for the “Remind Me” feature which will email or text you when the coin goes on sale. That will be Thursday, September 12, 2019 at Noon Eastern, 9:00 am Pacific. There is a limit of one coin per household. If you want to get one, it is recommended you sign up for the reminder as these are expected to go fast. 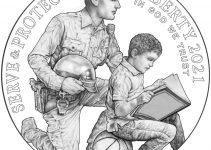