The United States Mint has released its weekly numismatic product sales report for the week ending May 9, 2021. The report covers the previous seven days in numismatic product sales by the Mint and is separate from the bullion sales report. The report shows that Mint sold a robust 37,087 products last week, its highest sales week since early March. Of the top ten selling products for the week, all save one were released this year.

As expected, the top selling product for the United States Mint was its newest release, the William Henry Harrison Presidential Silver Medal. In its first week of availability, the 9th medal in the series had a sales total of 10,702 for the week. That puts its sales total less than 1,000 medals away from the previous release for Martin Van Buren. Meanwhile, the second top seller last week for the United States Mint was the 2021 Silver Proof Set. Another 8,060 of the sets were sold last week, its second week of availability. That puts its total sales at 180,260, well on its way to surpassing the 2020 set’s total sales of 313,184 despite its significantly higher price this year.

The third top seller with another strong week was the standard 2021 Proof Set. 7,212 sets were sold by the Mint last week to dealers and collectors, putting its total sales at 263,297 for the year. That total also puts it on par to top the 2020’s sales total which was 464,034 sets.

The 2021 Christa McAuliffe Proof Silver Dollar and the 2021 National Law Enforcement Memorial Proof Silver Dollar continued their reasonably good sales this week as the fourth and fifth best sellers for the Mint last week. 1,991 of the McAuliffe commemorative proof dollars were sold last week while 728 of the National Law Enforcement Memorial proof dollars were sold. While neither of these commemoratives have set the lofty numbers of the Apollo 11 commemoratives from 2019, they are holding their own.

Here then is the complete top ten selling products for the United States Mint for the week ending May 9, 2021: 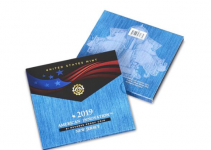